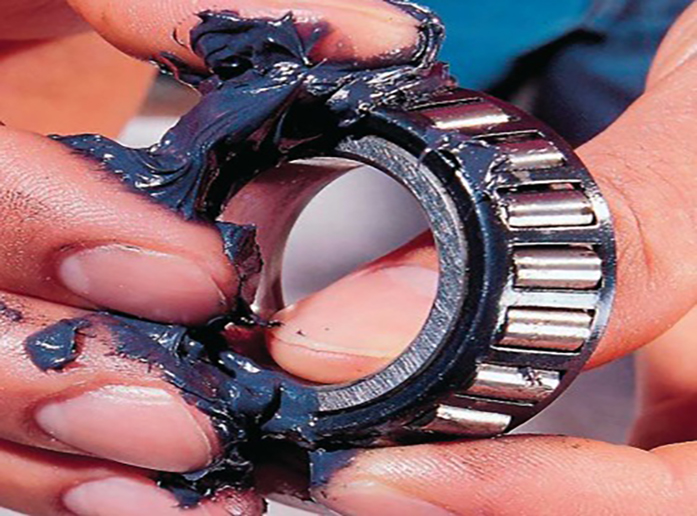 Grace and its applications

:Grace
Grace is a semi-liquid to solid product that is obtained by dispersing the hardening substance in the base oil. In most cases, additives are added to create some properties. Historically, in ancient Egypt around 1400 BC, olive oil and lime were used to make such oils and were used to lubricate the wheels of wooden chariots. Today, with the development of the industry, a variety of greases are produced with different performance. Grace components are a base liquid (usually base oils), soaps and concentrates with a variety of additives such as viscosity, anti-corrosion, anti-oxidation, anti-foam, etc. to make the necessary properties of these materials during the process. Psychotropic substances are liquefied under pressure and return to their solid state upon completion of the process.
The use of greases depends on the type of soap used in their production, and there are four types of greases in general applications:
• Calcium-based grease
• Lithium grease
• Sodium grease
• Grace Grace
Calcium grease has good water resistance but does not tolerate high temperatures. These greases are used to lubricate the pumps. Although sodium-based grease has good thermal resistance and is also used in bearings, it has low water resistance.
Among the general characteristics of greases are the following:
• Sealing a device that prevents dust from entering.
• No need for constant inspection and often retains its effect for a long time.
• Using a small amount of them creates good lubrication.
• They have good stability in different environments.
Grease lubrication has the following advantages over lubricating oil:
• The possibility of remaining in the lubrication area even in cases where the lubrication device or part of it is not well sealed and the possibility of separating the lubrication from the surfaces is high.
• Ease of use and reduction of lubrication frequency, especially in cases where it is not possible to replace lubrication at short distances.
• Complete sealing of devices and reduction of runoff leakage.
• The lubrication of the lubricant on the parts is well done at good temperature and high pressure.

To choose the right grease for different applications, it is necessary to pay attention to the following points:
Lubricated part temperature range; Maximum relative speed of parts
• Maximum pressure and load applied to the lubricated part during operation
• The amount of water or moisture in the environment
• Lubricated surface materials
• pH changes the pH of the environment
• Permeability of small parts and ducts of devices.

Preparation of grease After preparing the soap, the ingredients are transferred to the grease cooking machine called "kettle" and then oil is added to it. This device works similarly to autocalo, except that it is not pressurized. During cooking, the soap inside the oil turns into fine crystals and forms a gelatinous mixture. Crystal growth in oil is one of the most important and sensitive stages of grease cooking. If raw materials, especially non-standard oils, are used, the structure of the formed crystals is weakened, and during normal or hard work, the soap separates from the oil and the grease loses its lubricating properties.